In January 1918, even as World War 1 was raging, a new viral war had begun. Described as “The greatest medical holocaust in history” this largely forgotten flu epidemic killed more people in 24 weeks than AIDS has killed in 24 years, more in a year than the Black Death killed in a century.

Using the 50 million upper estimate, that represents 3% of the World population at the time. Some 5 times more people died in the year after WW1 from catching flu than from the bullets and bombs.

The movement of troops in WW1, many weakened by malnutrition, helped spread the virus. It may even have hastened the end of the war, as the first wave affected Germany and its Allies first, their increased mortality leading to a crumbling of resistance.

It was named the Spanish Flu because although outbreaks in France were extreme, censored press during wartime meant restricted news. The pandemic received wider press attention after it moved from France to Spain in November 1918, especially after King Alfonso became infected, generating huge press interest. Spain’s neutrality in WW1 meant no wartime censorship.

The origin of the Spanish flu pandemic, and the relationship between the near-simultaneous outbreaks in humans and swine, have been controversial. 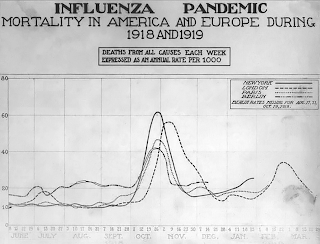 The source was quite probably a major troop staging and hospital camp in  Etaples France, where a virus was harbored in birds, and mutated to pigs that were kept near the front.

Another theory is that the virus strain originated at Fort Riley, Kansas, in viruses in poultry and swine which the fort bred for food; the soldiers were then sent from Fort Riley around the world,  spreading the virus.

The virus killed through a cytokine storm – causing the body’s immune system to overreact – which made it most effective in young strong people, rather than the weak and elderly, as is the case with most viral infection.

Death came mostly by bacterial pneumonia, and often directly by hemorrhages – bleeding from mucous membranes, especially from nose, stomach and intestine, and edema of the lung.

The virus raged through the summer of 1918 and in August a second wave, a mutated even worse version struck.

In civilian life, natural selection favours a mild strain. Those who get very ill stay home, and those mildly ill continue with their lives, preferentially spreading the mild strain. In the trenches, natural selection was reversed. Soldiers with a mild strain stayed where they were, while the severely ill were sent on crowded trains to crowded field hospitals, spreading the deadlier virus. The second wave began and the flu quickly spread around the world again.

A big spike in fatalities occurred in October 1918. This occurred right after the US Army Surgeon General and the Journal of the American Medical association recommended prescribing very large doses of Aspirin.

And then – after the lethal second wave struck in the autumn of 1918, new cases dropped abruptly – almost to nothing after the peak in the second wave. Possibly because the 1918 virus mutated extremely rapidly to a less lethal strain. This is a common occurrence with influenza viruses: there is a tendency for pathogenic viruses to become less lethal with time, providing more living hosts.
Possibly improved medical treatment of pneumonia symptoms also helped.